Success story: EPEEC contributes to the first simulation of a full aircraft engine

Aerospace simulations are a valuable tool for improving aircraft design. Enabling the efficient use of computing resources in this scope remains an important challenge. Using developments within the EPEEC project, a CERFACS team of researchers has built the first high-fidelity simulation of a full aircraft engine including several coupled engine components — a milestone that provides insights into the interactions between the individual components and will help to improve future simulations.

For the past twenty years, CERFACS has developed numerical tools and knowhow allowing more complex simulations of combustion engines.  Usually these simulations consist of the separate components of an aircraft engine. Using PRACE resources under the 20th Call project FULLEST, Dr Carlos Pérez Arroyo and project leader Dr Jérôme Dombard together with their co-workers at CERFACS, a private laboratory in Toulouse, have successfully performed one of the first ever full-engine simulations. 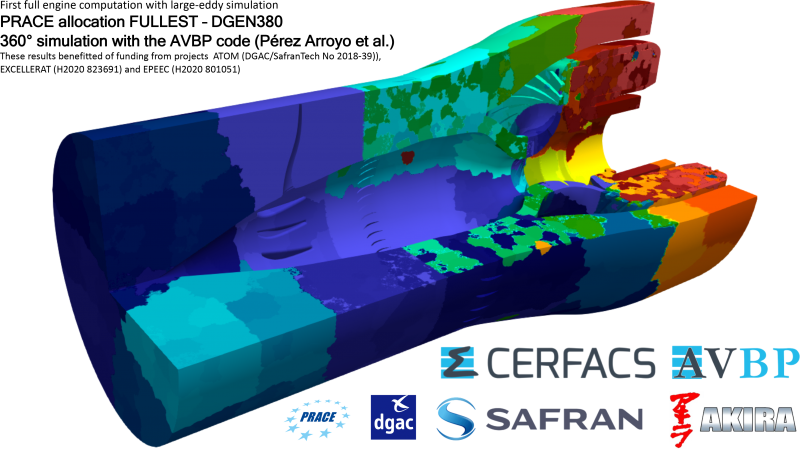 Performed on 16k cores on the TGCC/GENCI/PRACE system IRENE, distributing and load balancing this Large-Eddy Simulation is a challenge for most of the counter decomposition libraries. The TREEPART architecture aware hierarchical decomposition library [1] was developed under the EPEEC project to circumvent their limitations and successfully allowed the scientists to partition a more than 1Billion element mesh with excellent performance.

The simulation was performed in close collaboration with the two aviation companies Safran SA, a large producer of helicopter and aircraft engines, and Akira Technology, a pioneering aircraft engine company.