The EPEEC project is developing a set of tools supporting programming productivity for parallel and heterogeneous systems. In this context, compilers play a central role to understand the source code of applications, optimize it, and transform is appropriately to achieve high performance on systems with GPUs and FPGAs.

Our partner Appentra is developing a compilation system based on a new approach: the identification of code patterns in the source, which can be transformed by applying well-defined changes to introduce parallelization and the use of heterogeneous accelerators. These new compiler techniques are being implemented using the LLVM open source compilation framework (http://llvm.org). 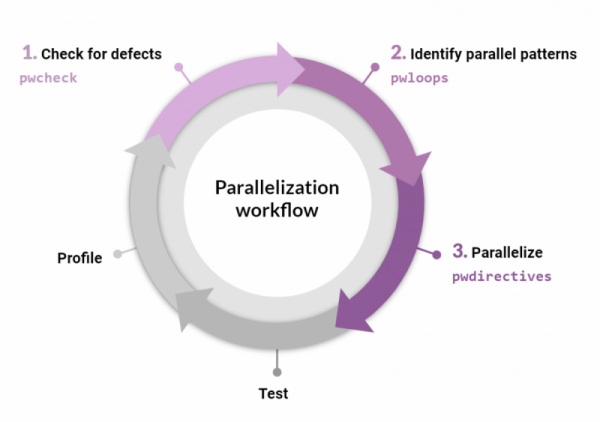 Parallelware Analyzer tools have been designed to cover the different stages of the parallel development workflow from looking for opportunities for parallelism to implementing them. The pwreport tool normally serves as a good entry point since it provides the higher-level reporting, including code coverage metrics, opportunities for parallelization and defects found in your code that should be fixed right away. It also offers suggestions on which tools to invoke next.

The tools guide the programmer through the process of parallelization by listing the loops that have been detected as parallelizable by the compiler, and also providing suggestions on the particular directives to be used for their parallelization, given a target execution environment (OpenMP/OmpSs for CPU, OpenACC for GPU…).

This is an iterative cycle that is repeated while the improvements give some positive return to the programmer, in the form of improved performance of the application.